You must be at least 18 years old or the age of majority where you live (whichever is greater) and agree to all of the terms below before continuing. If you do not agree to any of the following, please leave this Website immediately.

This Website — owned and operated by Studio 3X, Inc., a New York company — contains and displays sexually explicit content, including images, videos, sounds, text, and links. Please leave the Website immediately if: (a) you are less than 18-years old or the age of majority where you will or may view the content; (b) any portion of the content offends you; or (c) viewing or downloading the content is illegal in the community where you choose to view or download it.

Section 230(d) Notice: Under 47 U.S.C. § 230(d), we hereby notify you that parental control protections (such as computer hardware, software, or filtering services) are commercially available that may assist in limiting access to material that is harmful to minors. Information regarding providers of these protections may be found on the Internet by searching “parental control protection” or similar terms, or may be available at www.getnetwise.org (GetNetWise is not owned, operated, endorsed by, or affiliated with us).

Permission to enter the Website and to view and download its contents is strictly limited only to consenting adults who affirm that the following statements are true:

Tattooed Muscle Guys Rape A Dude In The Desert @ FetishForce.com 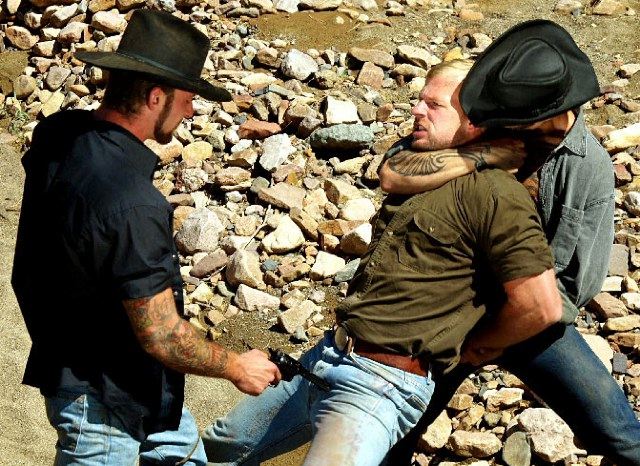 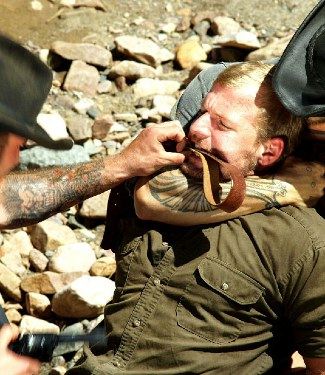 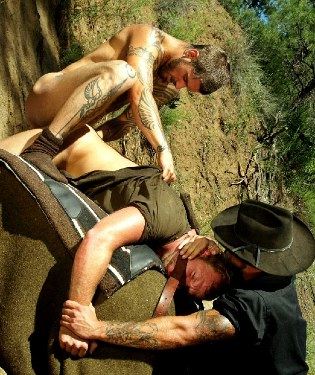 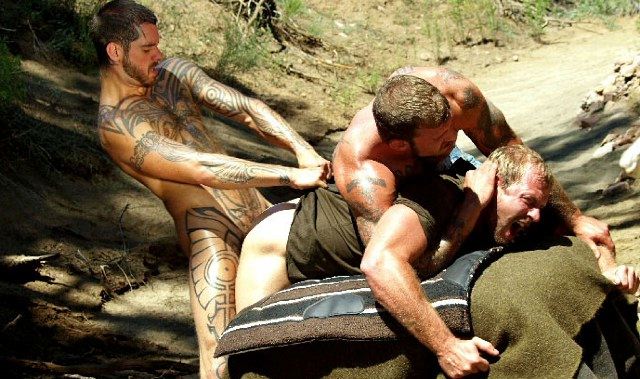 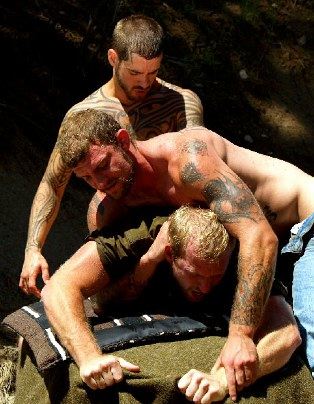 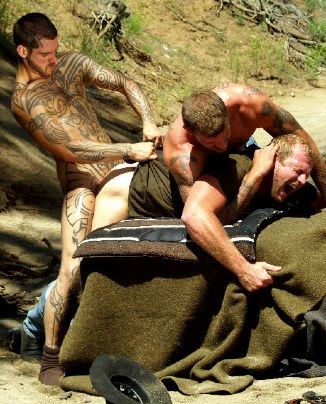 There's only one thing wrong with this video from Raging Stallion's new site FetishForce.com... Condoms. Other than the condoms it's an incredible scene. In fact it's so incredible that even with the condoms I thought I'd post it here.

I was looking through the videos from Fetish Force - looking for scenes for my fetish site - Twisted Pig. To me this video is incredible. To me sex is about power, control and submission, so a rape scene is perfect. And a rape scene with 3 hot hunky guys is even better.

The "rape victim" is blond muscle boy Scott Tanner. The two rapists are both heavily tattooed. There's Logan McCree (the thinner one) and Ricky Sinz (the more muscle bound guy). From the looks of it Scott is really resisting and struggling to get free. He doesn't like getting fucked - it hurts and lets everyone in earshot know it. But luckily their in the middle of a desert and no one hears him...

Of course real rape isn't such a good idea. Scott's boner in the picture below sorta sums things up... Deep down he loves getting manhandled and abused. I've talked to enough guys who've been raped when they were young to know they often get to the point where the get turned on by the idea of being raped. At which point it stops being rape. 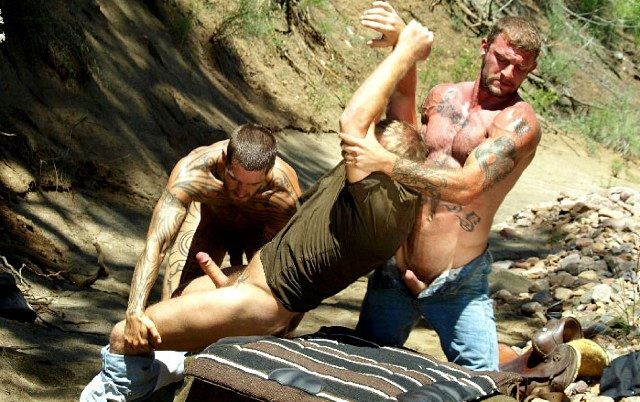 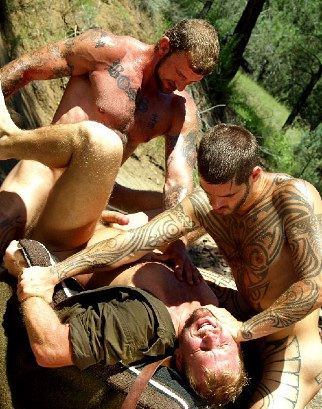 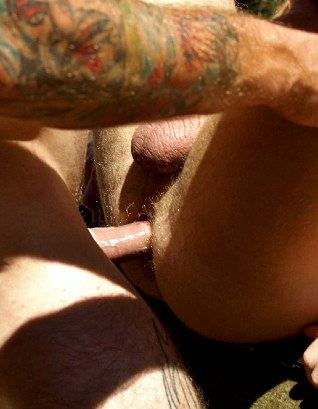 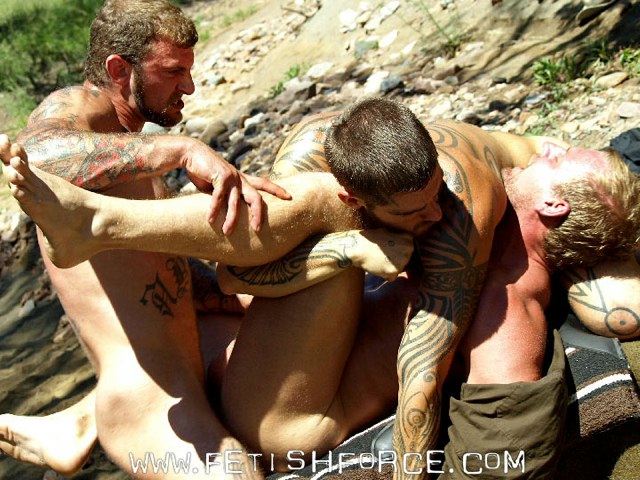 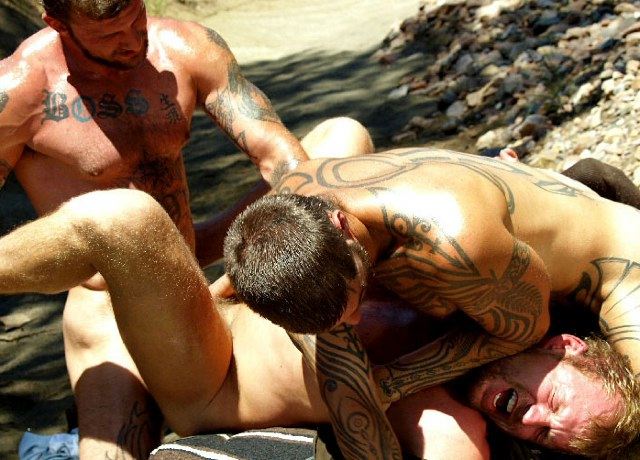 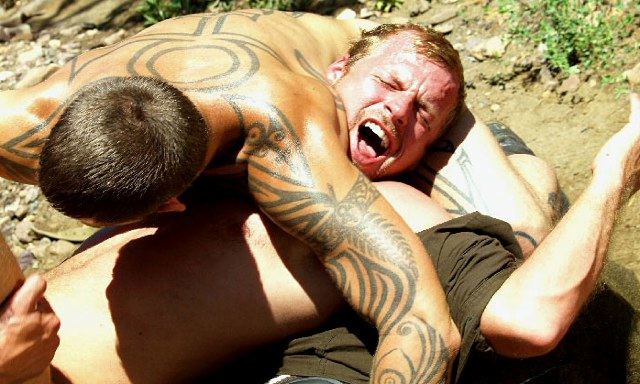 Tell Us What You Think…